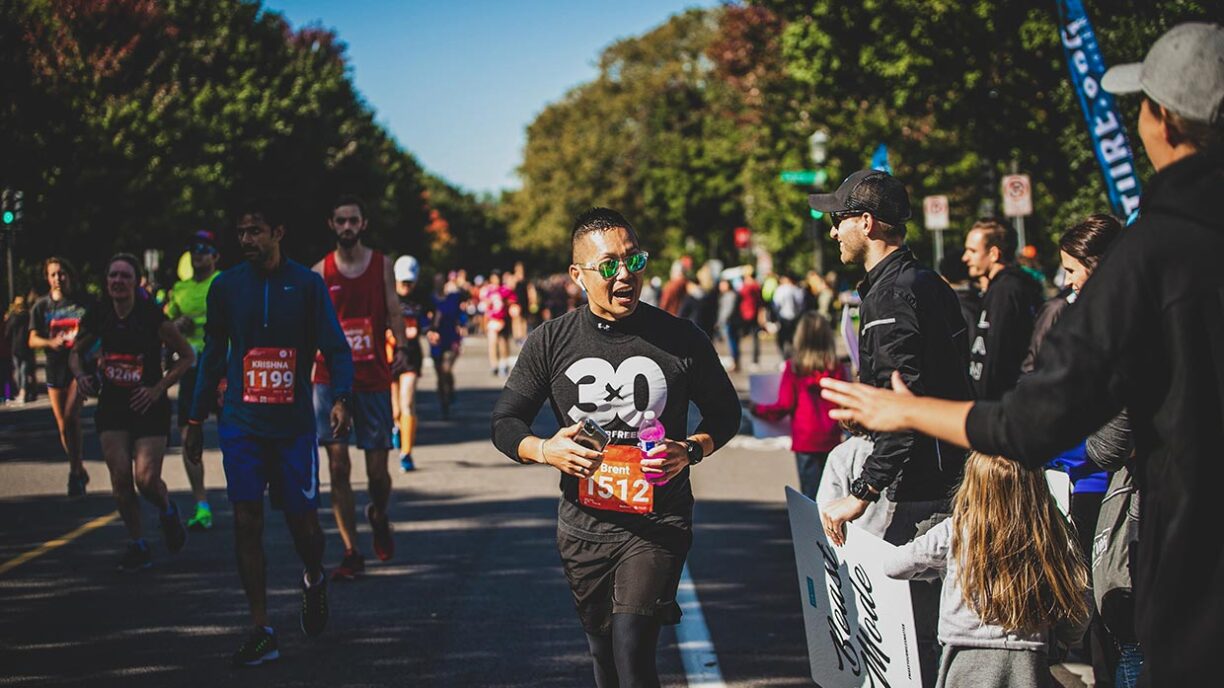 Recently, we had the opportunity to do a Q+A with founder of 30 for Freedom and longtime Venture alum, Brent Silkey. Brent is an inspiration to many in the Venture community, and his story offers us a picture of what can happen when ordinary people choose to partner with God and embrace discomfort on behalf of the oppressed.

Q: How did you first hear about Venture?

I first heard about Venture from none other than Rev. Ryan Skoog. He was my youth pastor and shared so many inspiring stories with our youth group about Across America rides and other epic feats of human endurance for a cause. He brought to the forefront issues that I was completely unaware of. He told us epic stories about what people were doing to address these issues. Something rose upInside me and I knew I wanted to be a part of the solution to these problems and make my miles matter.

Q: What was it that compelled you to do something about injustice?

My entry point to Venture was on a four-day 100 mile run called Run for the Border. We ran to raise funds to feed refugees on the border of Thailand and Myanmar. It blew me away that $1 could equate to ten nutritious meals.

It would be the most significant mileage in any four-day stretch of my life. A challenge bigger than I had ever faced before. And the fact that I got to do this with some of my very best friends, was a game-changer for me. The people who took part in this challenge have become like family. That four-day, 100 mile journey was literally life-changing. That was my entry point to Venture, to making my miles matter, to a new lifestyle of biblical justice.

Q: How did you come up with the idea to do 30 for Freedom?

For several years I had wanted to run 30 miles on my 30th birthday. But God put a dream in my heart to run 30 miles on my 30th birthday and to invite 30 friends so we could raise $30,000 to rescue girls out of sex trafficking because every 30 seconds someone becomes a victim. The crazy part of this dream was that it came in my first year as a Chi Alpha Campus missionary. The prospect of raising $30,000 for a ministry separate from this new calling to pioneer a Chi Alpha in St. Paul, was beyond daunting.

The tipping point was a breakfast with a former student. On December 28, 2015 at a Perkins Restaurant, I shared this dream with Yoel Oliva, who was on leave from the Marine Corps. He reached into his pocket, pulled out a $100 bill, and handed it to me across the table. He told me that he frequently heard briefings in the military about sex trafficking. He said it was awful, it’s everywhere, and we have to do something to end it.

Immediately following that breakfast, I contacted Pastor Mark Dean, Paul Hurckman, and Aaron Smith. I shared the dream with them and asked if it would be possible to pull off in exactly 5 months from that day – on my 30th birthday.

They said yes and yes, and I got to work. For the next several weeks I texted, messaged, and called friends who I thought would be interested in running 30 miles with me. I asked them if they would run 30 miles with me on May 28, 2016 my 30th birthday, and commit to raise $1000 to rescue girls from sex trafficking.

Everyone said, “No way.”

“They hated running, but they hated sex trafficking even more.”

I will never forget my 30th birthday as 48 of us lined up to run 30 miles. Additionally, 75 people of all ages and stages had arrived to run 5K for freedom. It was the most surreal day of my life.

Venture and KSTP channel 5 news met me at mile 11 1/2 of the 30 mile route.We did a short interview and I’ll never forget Ryan Skoog holding an inspirational sign that read “Inspirational sign.”

When we totaled the money that had been raised I was blown away and in awe of God. The total was $81,346. Are you kidding me? 100% absolutely a God-thing.

“In the last five years, we’ve seen over $800,000 sacrificially given and raised to do: sex trafficking prevention, rescue operations, and holistic survivor care. God is amazing!”

In the last five years, we’ve seen over $800,000 sacrificially given and raised to do: sex trafficking prevention, rescue operations, and holistic survivor care. God is amazing!

Q: What is your ultimate goal?

As a runner, I have two goals as it relates to 30 for Freedom, personally.

To run the World Marathon Challenge for 30 for Freedom – seven marathons in seven days on seven continents.

I will run 26.2 miles on Sunday, October 4 to rescue girls from the horrific nightmare of sex trafficking and invite anyone from the Venture Community to join me!